Promo: Get Free Investing for Up to 6 Months This Lunar New Year

What Is Inflation, and Why Should Investors Know More About It?

Everything you need to know about inflation and how you can protect your portfolio against it.

There’s been a lot of talk about inflation recently. Throughout all of this, you might be wondering: what is inflation, how does it work, and how does it affect me as a consumer and an investor? We're here to break it down for you (in layman terms).

Inflation is how the purchasing power of a currency declines over time. Or put simply, inflation is when the average price of almost everything goes up. While prices may fluctuate over time for individual goods and services, inflation looks at how the general level of prices – of food, transport, fuel, clothes, housing, entertainment, etc. – are rising in the broader economy. When inflation happens, it causes a currency to gradually lose its value, which then impacts the cost of living for everyone.

At its very basic level, inflation happens when production costs increase, or when overall demand in an economy increases at a faster rate than supply. There are many reasons behind why these scenarios could happen.

Cost-driven inflation could be caused by:

Demand-led inflation can happen when:

There’s also built-in inflation, which is based on inflation expectations. When workers believe that prices will increase in the future, they’ll ask for higher wages today so that they can buy more. This then prompts companies to raise prices of goods and services.

How do we measure inflation?

Now that we’ve roughly explained what inflation is, it’d be good to know how to measure it so that we can see its impact. One way to measure inflation is to use an index.

The one that you may be most familiar with is the consumer price index, or CPI. It looks at the average price of a “basket” of goods and services in an economy. Different categories of items (clothing, food, medical care, etc.) have different weights in a country’s basket to accurately reflect what an average consumer in that economy spends on. When the price of the basket increases, that’s inflation. How fast it increases will then tell us the inflation rate.

We may sometimes also hear of the wholesale price index (WPI) or the producer price index (PPI). The WPI measures prices of items before they reach the consumer, at the producer or wholesale level. The PPI approaches inflation from the perspective of a seller: it looks at the prices faced by domestic producers of intermediate goods and services over time.

How does inflation affect me?

Of course, no one likes to see their purchasing power weaken over time, but this doesn’t mean that inflation is bad. It impacts everyone differently. At the macroeconomic level, inflation in small amounts can be good.

Debtors, landowners and owners of physical assets tend to gain from inflation. On the other hand, workers whose salaries are pegged to inflation won’t be affected much by it. Those hurt most by inflation are those who don’t see their salaries increase, such as retirees, or those whose savings at a bank earn interest at a lower rate than inflation. Lenders who lent money at fixed rates will also stand to lose.

A little bit of inflation can be good for economies, as it’s a signal to consumers to buy now and producers to sell more – crucial activities to ensure that an economy is running and prices are stable. There’s no fixed rate of inflation that ensures a smooth-running economy, but most economists agree that a rate of about 2% to 3% is healthy.

When inflation reaches a higher rate than that, things can get out of hand. Consumers will buy more than what they need as they expect prices to rise even more in the near term, and producers raise prices in response to higher demand. At even higher levels, consumer confidence gets seriously eroded, and livelihoods of the poor and middle class can be severely impacted.

The most extreme version of this is hyperinflation, when prices increase at such a rapid rate that a loaf of bread this month can be worth a thousand times more the next. This often results in the collapse of a monetary system, and ultimately, the economy.

Hyperinflation started to hit Zimbabwe in 2007 when prices doubled in a day. By November 2008, inflation reached 79,000,000,000% a month. Water and power shortages became frequent occurrences, while many had to cross into neighbouring countries to buy goods. The US dollar and South African rand became Zimbabwe’s de facto currencies, and its central bank abandoned the Zimbabwe dollar as legal tender.

So who’s in charge of controlling inflation?

While all of us have a part to play in a healthily-functioning economy, financial regulators and central banks are often the ones we look to to manage price increases. For example, central banks may raise interest rates, making it more expensive for individuals and businesses to borrow money. They may also reduce the pace of their large-scale asset purchases or manage the exchange rates of their home currency. These measures that affect the supply of money in an economy are part of a central bank’s “monetary policy” toolkit.

Another main actor is the government. Depending on how they choose to change tax rates, give out subsidies or engage in large-scale spending such as infrastructure building, they can also impact how prices rise or fall in an economy. Collectively, these approaches are how governments choose to conduct their fiscal policies.

These actions usually affect asset prices immediately, especially stock and bond prices. Let’s assume a central bank decides to hike interest rates to temper inflation. When this happens, bonds that have fixed coupon rates become less attractive as interest rates rise. On the other hand, different equity sectors react differently to interest rate hikes. The financial sector usually benefits from rising interest rates, whereas companies that pay out dividends (like those in the utilities, real estate or telecommunications sectors) could see their share prices take a hit.

What can I do to protect my portfolio against inflation?

Diversification is key. As we’ve discussed, inflation and the resulting policy responses impact everyone and every asset class differently.

It’s important to ensure that your portfolio has a mix of asset classes so it is ready to withstand these market gyrations when they occur. Keeping your eye on long-term investment goals also helps smoothen out the short-term uncertainty when economic environments and interest-rate regimes change.

Not sure how you should diversify your portfolio to protect it against inflation’s effects? We’ve developed an intelligent investment framework, ERAA®, which determines the economic environment through analysing growth and inflation signals. This data enables ERAA® to allocate the optimal assets to your portfolio in any economic regime, protecting it against inflation’s effects while optimising it for consistent, long-term returns. 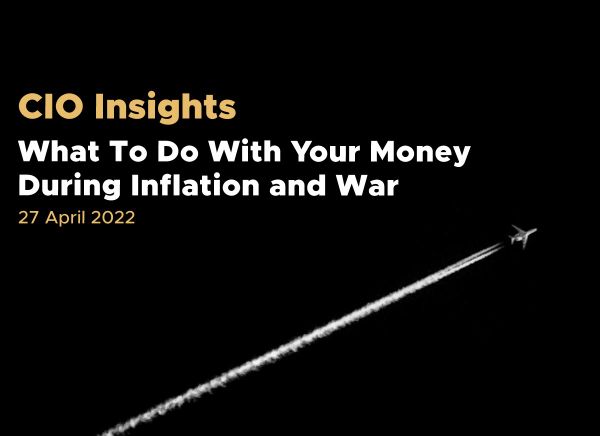 What To Do With Your Money During Inflation and War